The day started with a picnic under the sun at the picturesque Nunney Castle, near Frome.


Several hours later Nick Ballinger and his partner Lauren Pinkett, from Southwick, Trowbridge, were at Bristol Royal Hospital for Children with their three-year-old son Quade.

“My world fell apart and all it took was a matter of seconds,” says dad Nick. “Like most boys of his age, Quade loves to cause mischief and enjoys an adventure. 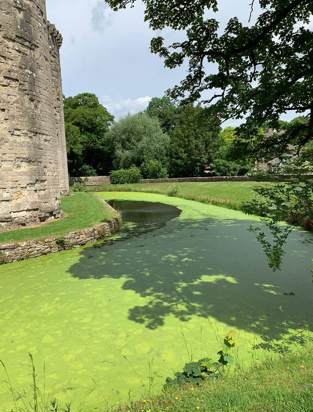 “We’ve been to Nunney Castle before and Quade had been around the water and understands the risks. However, on this occasion the moat at the 700-year-old castle was covered in thick green weeds (pictured) and within a split-second Quade, clearly thinking it was grass, had taken a step and gone in.

“I was there with my family and a frantic search ensued. When a child goes missing you expect to find them hiding but then the panic sets in. It all seemed to happen in slow motion from there and nothing really makes sense to you.

“My incredible brother-in-law Mark decided to dive into the water first and I was in quite quickly after him. It was cold and murky and around ten feet in depth. I actually went in with my eyes open expecting to be able to see something, but it was like I had jumped into a pint of Guinness.

“Seconds felt like hours, but suddenly Mark managed to brush his arm past Quade’s clothing and then hauled him up to the surface.”

Nick’s mum Jayne has been a nurse for 41 years, albeit recently she had been off work due to long Covid, but that didn’t stop her from using all of her experience in an emergency situation.

He adds: “Quade was limp, pale and blue, so my mum immediately began CPR and thankfully brought him back round. However, he was still cold and shaking. I was expecting him to be screaming but he was just moaning really deeply. I was still fearing the worst.

“Paramedics from the ambulance service arrived fairly quickly and then Wiltshire Air Ambulance landed. The critical care team helped to stablise Quade before we were flown straight to Bristol Hospital for Children in just ten minutes. 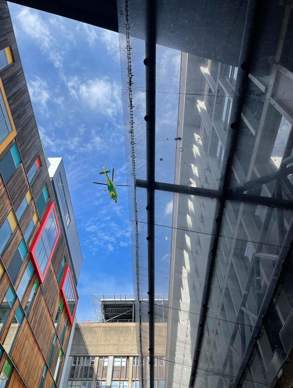 “You feel like you’re in safe hands when you’re on your way to hospital in a helicopter. All the panic begins to subside and that’s when it really hits you how lucky he has been and how lucky we are.”

Poor Lauren was unaware of the drama that had unfolded as she was enjoying a girls’ weekend down in Bournemouth, a trip understandably cut short after “just a coffee and a pizza” once Nick had relayed information about what had happened to their son.

She said: “From the age of 15 I’ve had an anxiety about going away as my grandma died when I was on holiday. Years later my grandad had a heart attack when I went to New York. It’s just whenever I go somewhere, something seems to happen.

“I’d explained that to my friends just half an hour before Nick called with the striking words ‘don’t panic, the critical care team are here’. I work in the ambulance control room and knew exactly what that meant and how serious that can be.”

Lauren raced back to Southwick initially to gather up some essentials and clothes for Nick, who was still wet after diving into the moat, before hot-footing it to Bristol to join up with her partner and son. She also had to arrange care for their other children; Everly, six, Aubree, five, and Estee, just eight months old.

Quade spent six days at the hospital undergoing tests and briefly returned to hospital, this time at the RUH in Bath, with pneumonia.

Lauren said: “We’re very, very lucky. It could have been so different had Wiltshire Air Ambulance not been available that day. Quade was at the hospital in just ten minutes, when it would have been over an hour by road.”

Nick added: “Quade remembers being in the helicopter, he remembers its colours and whenever he sees it flying over our house – which happens a lot being just down the road from the airbase – he’s always at the window looking up and is absolutely fascinated by it.”

Following Quade’s accident, Lauren set up a fundraiser on Facebook for Wiltshire Air Ambulance, raising over £2,000. The couple say they will continue to support the charity and raise awareness about its lifesaving service.

Lauren added: “You’re naïve; you never think you’ll need the service and then suddenly something like this happens.

“We knew Wiltshire Air Ambulance was a charity but we didn’t realise it costs around £11,000 a day to carry out their lifesaving work. It’s such an important service and that’s why it’s vital they receive as much fundraising as possible.”