Wiltshire Air Ambulance’s costs have risen to £4 million a year as the charity emerges from the clinical and financial challenges of the COVID pandemic.

A new three-year strategy launched by the charity reveals its income target will rise from £3.75 million a year to £4 million from the 2021-22 financial year onwards.

It comes as Wiltshire Air Ambulance plans to enhance its clinical delivery by investing in additional training, as well as increasing the number of pre-hospital consultants (doctors) on its rota.

- The charity is taking steps to futureproof itself, including investigating the possibility of replacing its existing Bell 429 helicopter in the next three to five years, along with succession plans being arranged for its senior team and Board of Trustees.

- Wiltshire Air Ambulance aims to embrace a digital culture, including advancements in patient care and paper-free record keeping for both clinical and aviation operations.

- The charity wishes to enhance its journey for patients and their loved ones, as Wiltshire Air Ambulance intends to research the possibility of employing someone to a dedicated patient liaison role.

- The charity is committed in its aim to educate every child in Wiltshire, Bath and surrounding areas in lifesaving skills, such as CPR, through its Emergency Awareness Training programme. 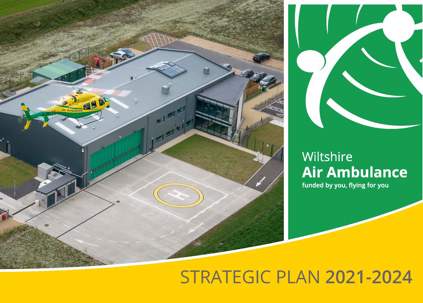 Wiltshire Air Ambulance director of income generation and communications Barbara Gray says: “In the past 18 months we have already adapted and coped with the very real clinical and financial challenges the Coronavirus pandemic has thrown at us and I’m extremely proud of our response.

“The long-term impacts of the virus remain unknown, however, this new three-year strategy is vital for the charity as we continue to consolidate and build again as life begins to get back to normal.

“We have important challenges ahead, with our financial target increasing to £4m a year and the potential succession plans for our helicopter, staff and board.

“Everyone has a part to play in our future, from staff, clinicians, volunteers, stakeholders and our donors.”

During 2020 Wiltshire Air Ambulance was called to a record number of incidents, 1,238. At the same time, due to the COVID pandemic, the charity saw its fundraising income hit by £500,000 due to cancelled events.

For the first half of 2021, recent figures revealed a further 5% increase in the need for its lifesaving service.

Wiltshire Air Ambulance is based in Semington, near Trowbridge, and can fly anywhere within Wiltshire in 11 minutes or to the centre of Bath in just four minutes.