Our supporters experienced the thrill of freefalling when they took part in a skydive and raised vital funds for our charity. 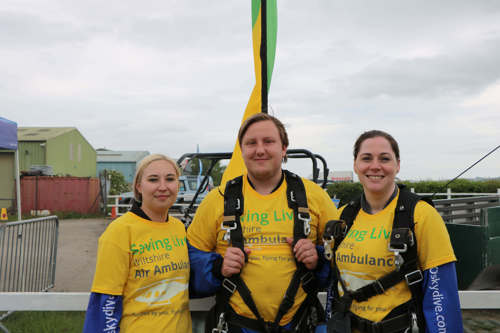 Three friends from Melksham were among those to take the plunge.

Sarah Badger persuaded her friends, Charlotte Paskin and Joe Hargreaves (pictured), to skydive as it was on her bucket list as she turns 30 soon. Charlotte and Joe are fearful of flying but they were glad they did it.

The trio are members of Melksham Music and Drama Group and Joe said: “It was really intense. The feeling you get when you’re on the edge is terrifying, but it was good and we did it for a good cause.”

Sarah said: “I would definitely do it again and next time I would go from 15,000 feet.”

Also taking to the skies were a number of employees from local businesses who support us, including Katrina Purell of Gooding Accounts, based in Westbury. The accountancy firm are members of our business networking group The 100 Club.

Katrina said: “This was my first skydive and it was amazing! I would absolutely do it again but I’d go higher, I’d do 15,000 feet next time. Wiltshire Air Ambulance is a brilliant charity that relies on donations and I and my colleagues want to do all we can to help because it’s our local air ambulance and you never know when we might need it.” 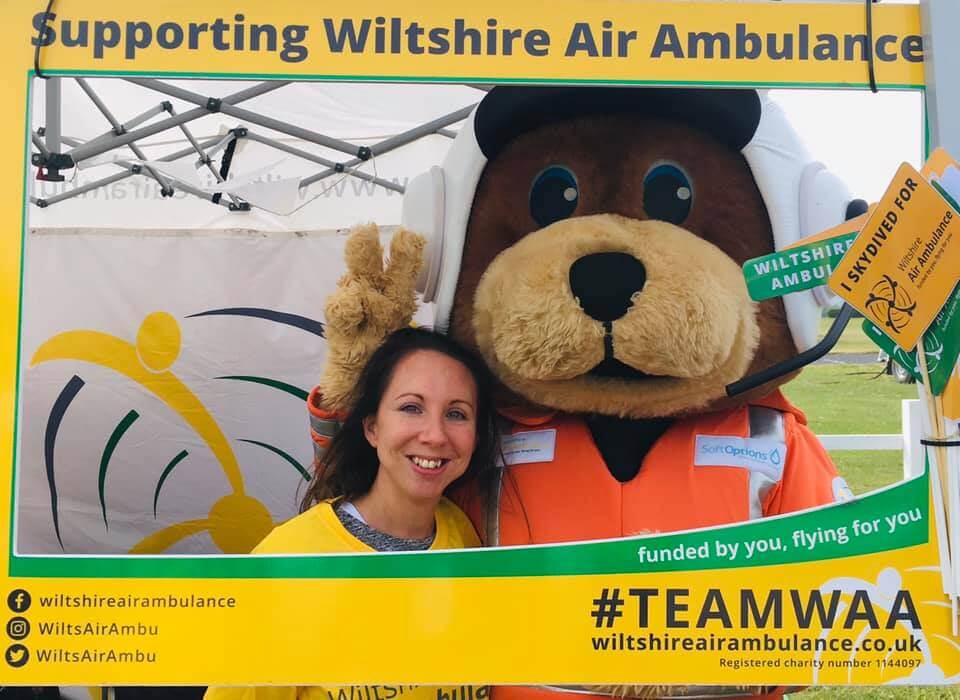 Katrina Purell of Gooding Accounts, Westbury, with our mascot Wilber

So far the skydivers have raised more than £8,200 for us.

Unfortunately due to low cloud and rain later in the day nine other people were unable to complete their skydives, but alternative dates have been arranged for them.

Kenresa Stratford, our events co-ordinator, said: “We’d like to thank everyone who took part in our skydive. For many it was a huge personal challenge and we are so proud of them. It was a shame that not everyone was able to complete their jumps due to the inclement weather but they will do them at a later date.

“We rely on donations to provide our essential Helicopter Emergency Medical Service in Wiltshire and surrounding counties, so the sponsorship our skydivers have raised will enable us to continue saving lives.”