A record amount of £84,000 has been raised for local charities through the Middlewick Open Gardens event at the Corsham home of Pink Floyd musician Nick Mason and his wife Annette.

It is the most the event has ever raised, beating the previous best figure of £52,000 for last year’s event. The money will be split between Wiltshire Air Ambulance and The Wiltshire Bobby Van Trust.

Over 7,000 people visited the gardens of Middlewick House across the two days (30 and 31 July) and they were treated to a host of stalls, including plants, gifts and clothing

The BBQ and cake stands were busy throughout the weekend and visitors were also attracted to Nick’s stunning collection of 30 high performance and classic cars.

Mr Mason made a break from touring to attend and he spent hours talking and signing books for queues of visitors.

Wiltshire Air Ambulance director of fundraising and communications Barbara Gray said: “We can’t thank Nick and Annette enough for hosting this amazing event once more and we are so grateful to the thousands of people who turned up across the weekend. We would also like to thank all of our brilliant volunteers who helped out at the event.

“The money raised has beaten all previous records by some way and it’s a huge boost to our charity as we continue to save lives across Wiltshire, Bath and surrounding areas.” 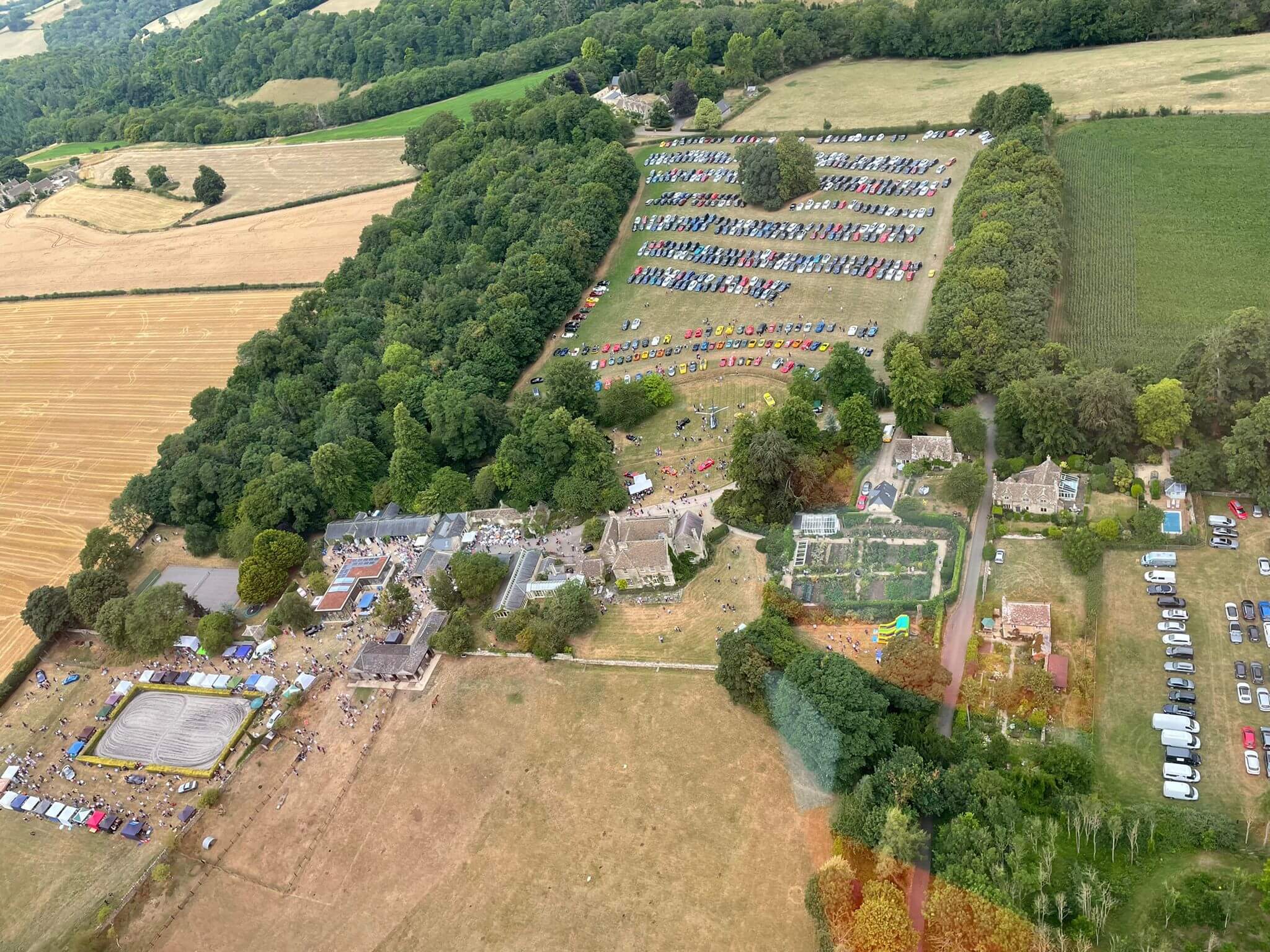 A view of the Middlewick event from the skies, taken by the on-call Wiltshire Air Ambulance aircrew

Jennie Shaw, director of The Wiltshire Bobby Van Trust, said: “The Masons are a private couple, yet now most of Wiltshire knows where they live! Frankly, I am amazed at their generosity – each year they allow thousands of people a glimpse into their private space and beautiful gardens and are fully supportive of the local community.

“I must also thank their neighbours and all of those living on Middlewick Lane for coping with thousands of cars descending on their quiet lane one weekend each year. I would also like to show my gratitude to Frank and Jordan Powell, Chippenham Rotary and all the wonderful volunteers who make the weekend possible.

“The event has gone from strength to strength and it also boosts the local economy with the increased footfall who spend their money in local shops.”

Wiltshire Air Ambulance is a charity which has provided Helicopter Emergency Medical Service (HEMS) across Wiltshire, Bath and surrounding areas since 1990. It costs £4 million a year to keep the air ambulance flying and saving lives. Nick and Annette are ambassadors for the charity.

The Wiltshire Bobby Van Trust works in partnership with the Wiltshire Police and provides a home security service and online safety service for over-60s, 18+ with a registered disability and works to safeguard people experiencing domestic abuse throughout Wiltshire and Swindon.

Back to News
Related News
Summer Raffle 2022 winners announced
Swindon Town help to kit out WAA
Help save lives together this summer with South Western Ambulance Service
Skip a coffee today
For the price of a coffee you could help keep us flying and saving lives!
Copyright © 2022 Wiltshire Air Ambulance. All rights reserved
HOME