On the evening of 6th August 2012, Dylan was riding his motorcycle home from Lechlade, when he had a collision with another vehicle and suffered catastrophic injuries due to the impact.


Dylan Jones was always sporty. From football to rugby, cricket to golf and swimming, Dylan was active. He also ran, but never more than 10km.

So for him to run ten half marathons after suffering traumatic life-threatening injuries in a road traffic collision – whilst raising £100,000 for Wiltshire Air Ambulance in the process – is truly inspirational!

In August 2012 Dylan, then 18, was looking forward to starting a sports coaching apprenticeship, but his life changed when he suffered catastrophic injuries while driving his motorcycle home to Lechlade, Gloucestershire.

The paramedics, along with a doctor, spent a considerable amount of time treating Dylan on the roadside giving him every chance of survival. After stabilising him he was airlifted to the John Radcliffe Hospital, Oxford, in under 10 minutes, and underwent a 12-hour operation.

While he was recovering in hospital Dylan and his dad, Chris, talked about creating a challenge and they set themselves the target of running the Oxford Half Marathon the following autumn.

Dylan, of Kempsford, Gloucestershire, says: “I was very sporty before my accident, but running the length of a half marathon was something I had never done or even thought about. 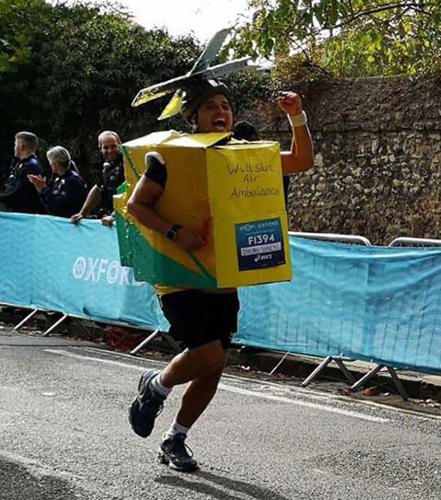 “Learning to walk again was first on my to do list, but I was so excited to take on this challenge and we couldn’t think of a better way to start our fundraising for Wiltshire Air Ambulance to show how grateful we all were for everything they did.”

Fourteen months after his accident Dylan, together with 70 friends and family members, completed the Oxford Half Marathon.

“Everyone completed it and it was one of the most challenging and emotional days I’ve ever experienced,” he adds.

Since then Dylan has run the Oxford half and Bath half marathons, with family and friends, and completed his 10thhalf marathon at Oxford in October 2018. He ran it wearing a helicopter costume!

Dylan says: “Crossing the finish line was, as always, so emotional, but I had a huge smile on my face. I felt incredibly proud of myself knowing that it was my tenth half marathon completed.

“None of the half marathons were easy and I will always find running harder than I did before my accident. What got me through them and recovering from my injuries was positive thinking.”

Dylan, who works as a teaching assistant and sports coach, has undergone eight major operations and may need more in the future. His right shoulder suffered a lot of nerve damage in the accident, which has led to severe weakness in his arm, and there are two fragments of glass from the accident embedded in his spine. His doctors say it is safer to leave the glass in but review the situation regularly.

The phenomenal fundraising by Dylan, his family and friends, for Wiltshire Air Ambulance from thesehalf marathons amounts to £100,000, which has enabled the helicopter and crew to continue saving lives.

For Dylan, fundraising for Wiltshire Air Ambulance is a way for him to say thank you.

“Wiltshire Air Ambulance holds a massive place in my life, along with my whole family. Without the skills of the paramedics and the speed of the helicopter, both arriving at the scene and airlifting me to hospital, I wouldn’t be alive.

“It’s very easy to go through life and not understand the true importance of things, so by running half marathons we have not only fundraised but also created a bigger and better understanding of Wiltshire Air Ambulance – therefore creating more opportunities for others to fundraise, meaning more lives are saved, “ he says.