It is not often that two air ambulances are required at the same incident, but for young couple Séanan and Alex Thomas, of Devizes, Wiltshire Air Ambulance and neighbouring Hampshire and Isle of Wight Air Ambulance proved to be lifesaving. Séanan (nee Henning) takes up the story.


“It was a rather ordinary and overcast morning on 16 April 2016 when my partner, Alex, then 26, was driving me, then 27, on his motorbike to a friend’s hen party. What followed was the most horrific and life-changing experience.

“At the time we were living in Westbury and we had not gone very far on our journey on the B3098, between Bratton and Westbury, before the bike skid going around a corner and we were in collision with an oncoming car. I was thrown from the bike and knocked unconscious. Alex was also thrown from the bike but remained conscious.

“We were fortunate that the car behind the one that hit us had an off-duty police officer in it, who promptly closed the road and called the ambulance. Because Alex and I were both severely injured, not only did they send Wiltshire Air Ambulance but also the Hampshire and Isle of Wight Air Ambulance too.

“The crew of Wiltshire Air Ambulance attended to me and they were fantastic and caring. I have no memory of the accident – the first thing I remember was briefly waking up in the air ambulance and being informed by the paramedic about where I was and what had happened. He broke this upsetting news gently and gave me painkillers to ensure I was in no pain.

“They flew me to Southmead Hospital, Bristol, a major trauma centre, in under ten minutes, where I woke up properly in the evening in the Intensive Care Unit. I was informed I had broken my pelvis, sacrum and scapula. I had also fractured my spine, punctured a lung and broken a rib, suffered a bleed on the brain and extensive soft tissue damage to my right thigh.

“Alex was also flown to Southmead – he had broken his foot, sacrum, his spine and his pelvis, which required surgery to repair. Both of us required blood transfusions due to internal bleeding and if it had not been for the air ambulances’ quick response in getting us to the hospital things may have turned out worse for both of us.

“It took us four months of a slow and painful recovery, involving physiotherapy and hydrotherapy, as well as therapy sessions to help with PTSD, before we were able to go back to work on a phased return.” 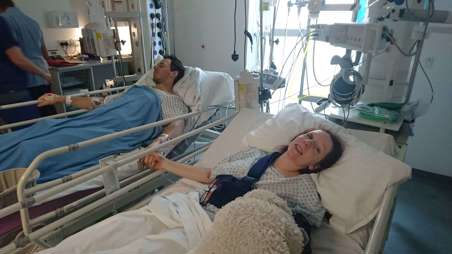 A wonderful future together

“However, out of this horror came something wonderful. Our time in recovery together strengthened the bond between Alex and I to the point where neither of us could imagine life without the other. Following the accident Alex and I got engaged. We were married at St Bernadette’s Catholic Church, Westbury, in April 2018 and held our reception at Rye Hill Barn, near Warminster.

“In tribute to the Wiltshire and Hampshire air ambulances, rather than wedding favours we donated the money to the organisations, without whom we may never have made it to our wedding day. We also had a display at the wedding reception with information on the air ambulances and collection envelopes to help raise awareness of the charities.

“The Wiltshire and Hampshire air ambulances helped ensure Alex and I are able to have a future together and we are so grateful for this. I was unware until my accident that the air ambulances run entirely on donations.

“I have been spreading the word and now my family and friends all actively raise money for the charities. Two of my friends ran the Bristol Half Marathon for WAA and raised over £1,000. My sister and her baby group run regular bake sales to raise money and my place of work – Urchfont Dental Care - now advertise in the Wiltshire Air Ambulance annual diary and have a collection tin in reception.

“The air ambulance is an amazing and important charity. The people there work so hard to save people’s lives and I cannot thank them enough for what they did for me and my new husband.” 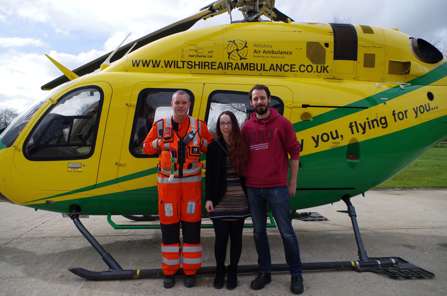