Colin, 80, retired at the end of October after 20 years of co-ordinating the charity’s collection tins and buckets.

During Colin’s time with the charity the number of collection tins in shops, pubs and other business premises all over Wiltshire increased from 50 to 1,000, raising in the region of £500,000.

Throughout his volunteering Colin, of Chippenham, never claimed a penny for mileage expenses. Altogether he has given just over 22,000 hours (or 2.5 years) of his time to Wiltshire Air Ambulance and driven more than 43,000 miles (the equivalent of more than one and a half times around the world)!

Colin - pictured above with charity staff, pilots and paramedics - has seen the transformation of Wiltshire Air Ambulance from the charity sharing a helicopter with Wiltshire Police and him working out of a portable building to becoming a stand-alone air ambulance owning its own helicopter and moving into its purpose-built airbase at Semington, near Melksham.

Colin, who lives with his wife, Joy, said: “The charity has changed considerably in my time volunteering with it. When I started there were two part-time members of staff and now it has grown beyond imagination to where it is now at Semington.

“I thoroughly enjoyed my time with the charity, travelling around the county and meeting people who support it by having collection tins in their premises. I’m proud of the amount of tins in circulation and all the small change (and notes) that people donate all adds up and makes a difference to the charity.”

Colin, a retired Master in the Merchant Navy, won three accolades for his dedication to Wiltshire Air Ambulance.

Last year he won the national Charity Volunteer of the Year award run by the Association of Air Ambulances (pictured right). 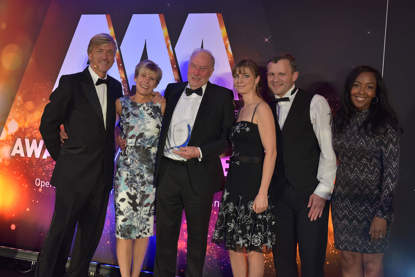 In December 2018 HRH The Duchess of Cornwall presented him with a trophy, on behalf of Wiltshire Air Ambulance, when she officially opened the charity’s airbase.

He was also a runner-up in the Wiltshire Life 2019 Awards for the Local Hero of the Year category.

“We are very fortunate to have had the benefit of his expertise and enthusiasm. We thank him for his tremendous dedication in building up our network of collection tins all over Wiltshire and his efforts has enabled Wiltshire Air Ambulance to save countless lives over the last 20 years.”

On behalf of the charity’s staff and aircrew, Mr Philpott presented Colin with a luxury hotel break gift voucher as a gift for his dedicated service.

Colin, who has two daughters and five grandchildren, told staff at Wiltshire Air Ambulance: “It’s been a pleasure working with you all and I wish you all well in the future.”